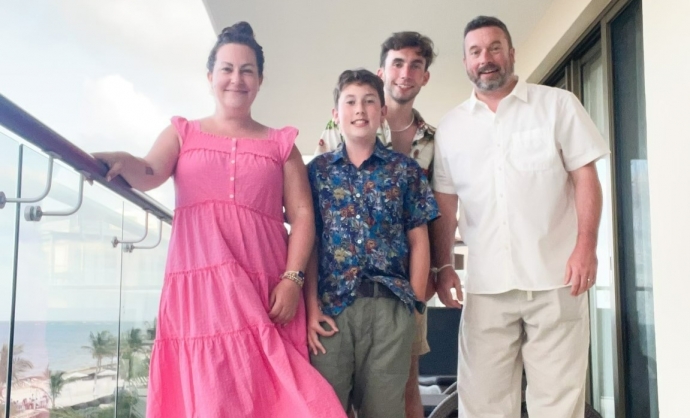 My son Cooper played baseball since he was 4yrs old.  During the summer of 2018, when he was 12 years old, we noticed that he had a hard time catching the ball (with his left hand).  He was the team's back catcher, and any ball player knows that position is one of the most important.  Later that year near the end of November, Coop got really sick.  He had a fever and couldn't keep anything down.  After a few days at home, we decided to take him to the hospital in the morning so he could get some fluids back in him.  But the morning did not arrive as planned.  During the night we heard a terrible knocking noise and when I got up, I found Cooper on the floor in his bedroom delirious.  I helped him to the car and my wife took him to the hospital.  Not long after I got a frantic call from her telling me that he has a brain tumor and is being rushed from the Greater Niagara Hospital to McMaster Children's Hospital in an ambulance.

The panic button now being pushed I made arrangements for my mother-in-law to come look after my youngest son, Chase.  When I arrived at McMaster, Cooper was stabilized in the PICU (Pediatric Intensive Care Unit).  My wife and I met with a huge team of doctors, and they informed us that Cooper needed immediate surgery.  They did an MRI of him when he was unconscious and showed us the images - which I can say were terrifying.  The tumor and surrounding fluid were the size of nectarine.

While we waited for more news I was approached by a social worker.  She let me know that Ronald McDonald House was expecting me, whenever it was convenient to check in.  I had no idea what that even meant but took the opportunity to walk across the street to get some fresh air.  When I arrived the Family Services Team met with me and registered me at the House and took me on a short tour.  I was blown away by the services they offered families.  With Cooper’s surgery scheduled for the next day, and because we now had a place to stay, I took the opportunity to drive back to St. Catharines and update our family who were desperate for news.  I then took Coop’s little brother back with me so we all could be together with Cooper.

Our greatest concern was the possibilities of surgery.  The tumor effected Cooper’s left side of his body, which is why we discovered he couldn’t make a fist with his left hand – baseball mystery solved.  The doctors braced us for the possibility of Cooper losing function of the left side of his body.  These were by far the darkest hours our family has ever experienced.  My wife stayed overnight with Cooper, and I took Chase over to RMHC for the night.  Having the ability to stay so close to the hospital was amazing.  I cannot even think of how we would managed otherwise.

Cooper’s surgery went very well, and not long after he was squeezing my hand (with his left hand) with more strength than ever before.  We were SO relieved.  Cooper was moved out of the PICU and into one of the wards for his recovery and subsequent physiotherapy.  During that time Chase and I spent the evenings at Ronald McDonald House while my wife took the ‘overnight’ shift.  The volunteers had so many great programs for us; like movie night, and games night.  Having these outlets of normalcy really helped Chase.  It also gave my wife and I a job so-to-speak.  While not caring for Cooper one of us was to keep Chase entertained.  Working in shifts at the hospital we took turns at RMHC with Chase.  Having little brother in good spirits when we visited Cooper made a huge difference.  Cooper and Chase would laugh and talk together which brought Cooper’s spirits up and no doubt helped his speedy recovery.

During the time we stayed at RMCH, I recall not having much emotion.  I was a walking zombie and my wife shed enough tears to rival Niagara Falls.  Food often was one of the last things we thought about.  But the volunteers at RMHC wouldn’t hear of it.  They made sure we had a healthy meal and packed us things to take and eat at the hospital.

When Cooper was discharged from the Hospital, we took him for a very brief tour of RMCHSCO, from which he heard so much about from his little brother.  We are so very grateful to have been able to stay there during this crisis.  I can say with absolute certainty that RMHC helped Cooper recover so well.  If his family was exhausted and couldn’t be with him every day, I am certain that fear and stress would have changed his well-being.  But that was not the case, and we are forever thankful.

Cooper continued his journey by having to receive sixty-eight weeks of Chemotherapy at McMaster Children’s Hospital.  Every week we would take him to clinic, and we would be with him for up to four hours for treatments.  While in the Oncology outpatient clinic we would see RMHC volunteers come in with the Happy Wheels cart full of coffee and games for the families.  I often would hear the kids cheer when the Happy Wheels cart came in.  The Ronald McDonald House Family room was right beside this clinic in the hospital, and we used it every week.  The friendly volunteers would fix us a hot drink and give Cooper treats.  We also relaxed in the Family Room when we had to wait for the doctors because the furniture was so comfortable – unlike the awful chairs they have in the hospital.  What a great feature to have at the hospital; it made so many families smile even when they had to endure such trying and worrisome treatments with their children.

Cooper finished his Chemotherapy, and another minor neurosurgery, and is now a healthy teenager.  We only need to visit McMaster a few times a year for checkups.  He is on his school’s honour roll, and he continues to play AAA baseball.  I am now an employee at RMHCSCO as well as a monthly donor at RMHCSCO and continue to raise money for them whenever I can.

Sign up for our e-newsletter to read inspiring stories from our families and keep up to date with Ronald McDonald House Charities® South Central Ontario news.